Though I don’t particularly enjoy Dark Souls, that’s only because of its setting. Dark fantasy doesn’t do it for me, but the tough-as-nails gameplay — that I can get into. […]

Though I don’t particularly enjoy Dark Souls, that’s only because of its setting. Dark fantasy doesn’t do it for me, but the tough-as-nails gameplay — that I can get into. It’s for this reason I always seek out and tend to appreciate those soulslike games that use the Dark Souls structure in a new time and place.

Among those growing contenders, few have impressed me as much as The Surge 2. It builds not just on the Dark Souls formula, but its own established world, making for a brutally hard but totally memorable sequel.

The Surge 2 improves on its predecessor in every way. Let’s just start there. Character builds ditch the previously binary system of choosing fast but weaker or slow but stronger. In its place comes a whole host of new options that give players total control over their character with lots of new wrinkles, like a drone assistant that can be fitted with several kinds of abilities and a deeper gear system that rewards those players who hunt down the best equipment diligently. The first game lacked these  genre signatures that feel crucial to appease the biggest fans, leaving it feeling like a lesser imitation.

With The Surge 2, those vital elements are all in place. Upgrading your character is a pauseworthy decision each time, but it also never really feels like you’ve wasted that time. Every upgrade brings noticeable improvements right away, making the progression system extremely satisfying. I still prefer my newly customizable character to be agile and fast, but it no longer feels like that leaves her to be a weakling as a result. Gear is as fun to chase here as it can be in the best loot shooters, and it gives another good reason to replay areas aside from grinding your level.

When you are making progress, the world is more alive and interesting than ever. Outside of the CREO complex for the first time, the world beyond those once stifling doors brings new and fascinating enemy threats and more environmental diversity. The world of The Surge was already one of the most interesting of the genre because it told not just a great sci-fi story, but it didn’t bury it. The Surge 2 is even prouder to tell its tale, and it’s genuinely refreshing for a soulslike to do so. 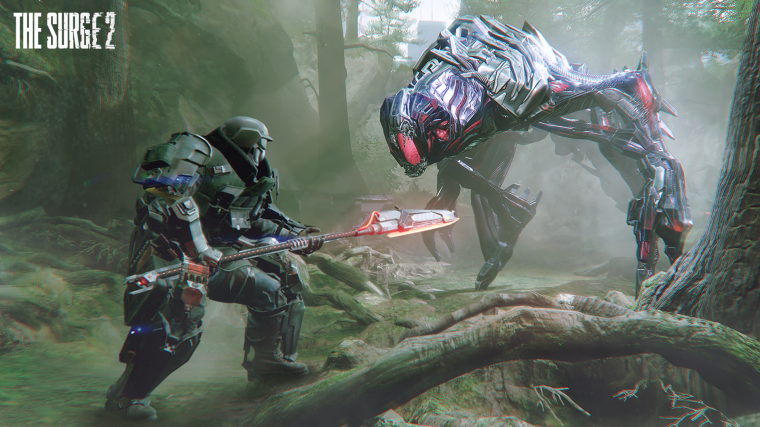 Audio logs carried the first game’s story farther than the mechanic tends to in most other games, but here those return with help from a more cinematic story that soulslikes have rarely tried — only really Sekiro and Ashen come to mind as counterparts.

Perhaps the best part about the The Surge 2 is how it includes more bosses than all of the first game and its two story DLCs combined. Like a great soulslike, the bosses demand different tactics each time and even your most comfortable play style will be challenged regularly. They’ll get maddening at times, but they don’t feel unfair, even as the first game’s suboptimal control scheme returns for another go.

Beyond the deeper customization and fascinating world, The Surge 2 employs a lot of the same tricks up its sleeve as before — and as its inspiration — like enemies that jump out of areas for cheap shots, or boss battle arenas that, once entered, force you to stand and fight.

Outside of bosses, which get very tough, this game tends to feel just a little easier than before though, maybe because it’s a sequel and character builds are so much stronger that you can find your perfect fit. But easier does not mean easy, anyway. It’s still brutal and you’ll still be making plenty of corpse runs.

While The Surge 2 can still be reduced to “sci-fi Dark Souls,” it builds on its own earned accolades with deeper player customization, a more interesting world to explore, and many more bosses. There’s not a lot here that genre fans won’t like, even as it feels a bit too close to its inspiration at times. But the story focus really helps The Surge 2 stand out among its hazily told genre counterparts. It’s a clear improvement over the original and should carry the series strongly into a third game.

Posted on October 8, 2019 0 By markdelaneysays Reviews Posted in Reviews Tagged #the surge 2