Skip to content
Meow Motors Review: The fast and the furriest
Reviews

Meow Motors Review: The fast and the furriest

Despite trailing behind two racing juggernauts in Sonic and Crash this summer, the felines of Meow Motors deliver our favorite kart racer of 2019.

Editor’s note: As this is our first official site review, I wanted to remind readers that when applicable, I’ll be giving my son his own section of reviews to speak as the kid in the experience. I hope you and your family will appreciate this unique perspective in online game reviews from Nathan, aka Mink! Look for his input below.

The kart racer has been a staple of video games almost as long as home consoles. Every major mascot of the ’90s tried their hand at some point or another with varying success. Even today, new kart racers pop up a few times each year.

If recent marquee entries from Crash Bandicoot and Sonic the Hedgehog haven’t completely filled the kart racer-sized hole in your heart, the indie alternative Meow Motors makes for a fun, if familiar, entry into the genre. 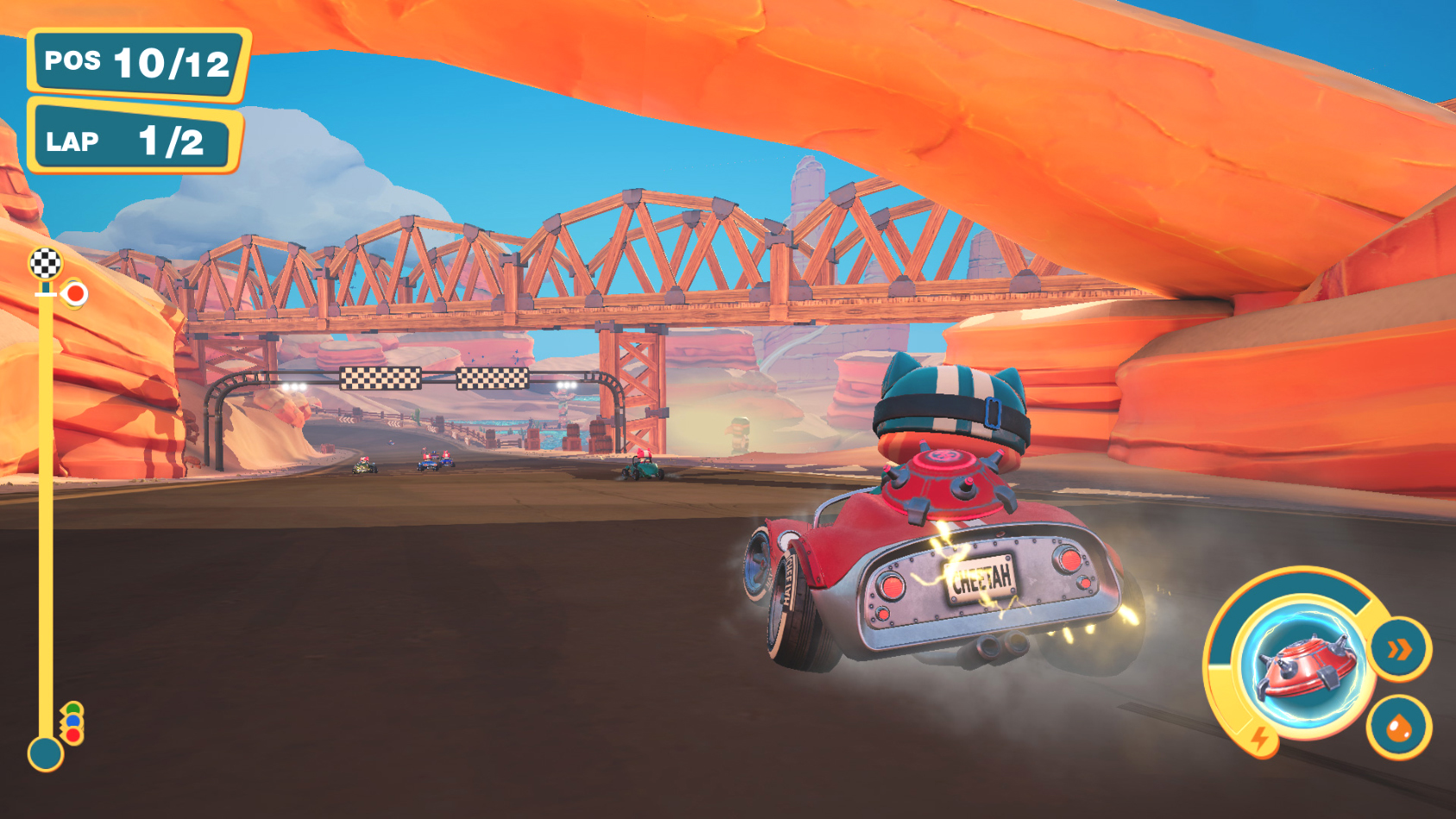 Probably the greatest strength of Meow Motors is also its only obvious weakness: it’s a by-the-numbers kart racer in virtually every way — but that’s okay. From boosting at the starting line to drifting hard around corners, hitting competitors with power-ups and racing across every speed boost on the track, Meow Motors is not unlike most other kart racers you’ve already played, but that doesn’t mean it’s totally without anything uniquely special.

At the forefront is the roster fully filled out by felines. A family game comprised entirely of cute cats and kittens seems like a smart move, and each of the characters has their own style and special passive ability. Alongside those characters, players can also mix and match about a dozen different vehicles, from modern race cars to old-fashioned muscle cars. Customization only goes as deep as a car’s color, but the younger audience for which Meow Motors is designed will find more mileage in that simple approach.

Racing would have to hold up to keep Meow Motors worthwhile, as that’s what often sinks the lesser releases in the kart racer field. Luckily, Meow Motors is reliable and a lot of fun, plus it maintains the strongest sense of accessibility of any 2019 kart racer. While Team Sonic Racing’s difficulty curve leaves some players in the dust and Crash Team Racing’s control scheme was strangely left suboptimal for its remaster, Meow Motors offers difficulties that are more fairly implemented so that any player can feel like a champion.

Track and weapon variety are, like the project as a whole, pretty standard but again remain enjoyable. Tracks come in about eight different aesthetics, and each of them offers multiple maps like beaches, haunted houses, or lava pits. It’s the stuff of a child’s imagination and that’s exactly how it should feel. Power-ups unlock over the course of the game’s story mode, so while there are very few early in the game, by the end there are plenty, leaving the strategy up to players. The usual suspects are all there. Missiles to fire ahead, oils to spill behind, etc. Time after time, Meow Motors proves to be familiar, but that goes for its design and fun factor alike. 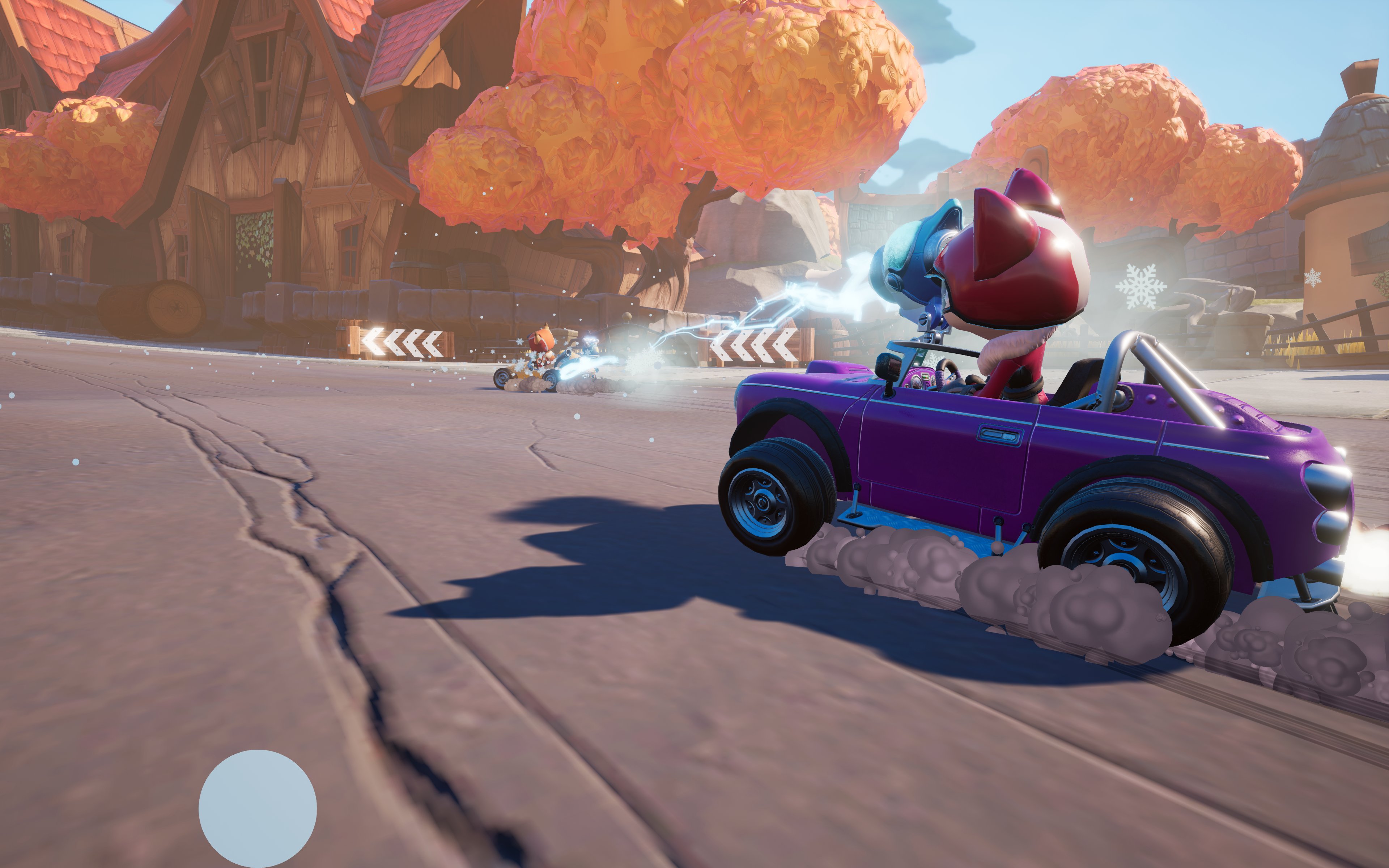 In addition to regular racing, there are also battle and drift modes. The battle mode is the most fun because it remains an A to B race, unlike Mario Kart’s mode of the same name, but it totally changes the way you play. It’s more like a destruction derby, and the mode gets better as you go along because more power-ups keep getting added to the field. Drift mode is a fun score attack mode, though we found some of the instructions in this mode to be a bit unclear. Most of the time, we preferred racing or battling. Most importantly for families, there’s the ability to play with up to four players in splitscreen, which all great arcade racers should offer.

The barebones comic-style story and some translation errors definitely make it hard to forget Meow Motors was made on a fractional budget compared to its counterparts, but we found both of those issues mostly forgivable. Really, since it’s our favorite kart racer of the year, it’s more admirable for Meow Motors to have done more with less like that.

I really liked the final boss because when I defeated him it meant I had unlocked every cool character and car in the game. Getting three stars on every level is a fun challenge. My favorite character is Lucky because he’s cute and has a great special ability. My favorite car is Cheetah because it’s so stylish.

Between May and July of this year, we played three kart racers: Team Sonic Racing, Crash Team Racing Nitro-Fueled, and Meow Motors. Though all three are enjoyable, perhaps surprisingly given each game’s budget, we like Meow Motors the most. It doesn’t try coloring outside the lines of the kart racer, but what it lacks in originality it earns back with the most accessible genre game of the summer.